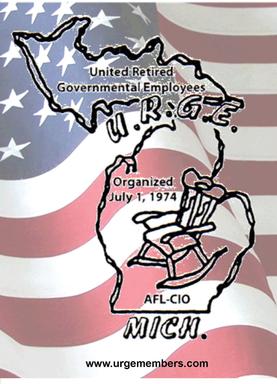 U.R.G.E. was formed to assist in advancing the position of retired governmental workers

The major purpose of U.R.G.E. is to help those persons attempting to survive on a pension

The concept of U.R.G.E. was first introduced on May 25th, 1971, by a group of eight Flint Firefighters, who were later joined by 45 retired Flint Police Officers.

U.R.G.E has helped to advance retired governmental workers in Flint and elsewhere.

Our office is located in the Dort Mall at 3600 S. Dort Hwy, Flint, MI 48507
across from the Star Coney Island Restaurant

To become a member of URGE please print the application form, fill out the form and mail in to address on the form to have your request for membership voted on by the membership.